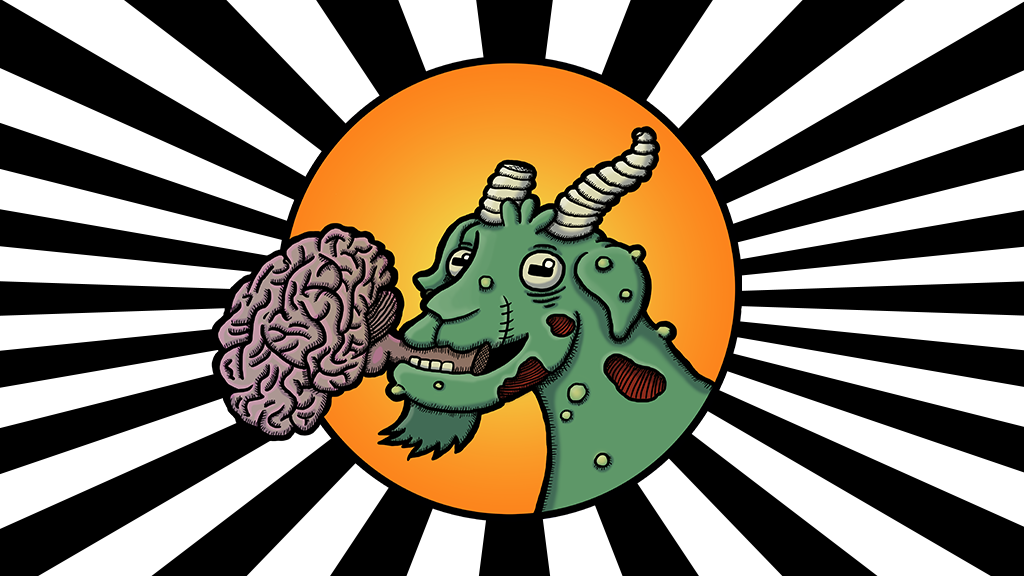 Zombie Circus Goats: Story Time!  Plus: Before and After Pics of Ringo’s TP Stash.

Back in November 2019 I was walking through the Oakland airport wearing a 60 lb. backpack full of buttons. The buttons were for the West Coast Scavenger Hunt, an event we bootstrapped across 5 cities by extracting promises of hard labor from friends and then crashing on their couches.

My shoulders hurt but I was excited. I personally buttoned for Seattle, Portland, and Berkeley. It reminded me of punk rock nights spent flyering phone poles and running from cops.

Once the hunt got rolling it was fun. We gave out ciphers as clues, 30 in all, posted to social media. Some were so difficult only a handful of teams solved them. The final clue was a set of scrambled GPS coordinates, small portions of which had been handwritten on cards dispensed in the hidden cache for each city.

The infamous Berkeley 1 Clue, solved by only 2 people:

Eventually the winning team found buried treasure on a remote beach on the Sandy River about an hour outside Portland.

If you’re interested you can read the full report, including write-up and pics from the winners, here.

After the West Coast Scavenger Hunt we decided we should stage something with less IRL setup.

Welcome Human 1 was our next project, an online story-based mystery. Participants worked to solve weekly email clues. When they succeeded, things got better for the story’s protagonist, when they failed things got much worse. 2500 people signed up. The puzzles we gave were way, way, waaaaay too hard. Something like the last 4 puzzles were solved by only one team. WH1 was described as “Brilliant!” and “A bad knock-off of Cicada 3301.” Fair enough. See the WH1 clues page here.

This is how freaking hard the WH1 clues were:

Our three-person team had been bouncing ideas around and refining Zombie Circus Goats this whole time. We knew we wanted something that made game night an unmitigated laughing disaster. With a resource management component. And lots of weird cards.

Once we had the concept nailed down and ideas for a bunch of cards, Taylor went full vampire mode, isolating in her room for long hours to illustrate. Ringo built a website and wrote articles about how to defeat grizzly bears. Alec designed and play-tested. Got feedback. Redesigned. Play-tested more. Added dice.

We talked about crowdfunding and wondered about timing the launch. March 4th was our originally conceived date.  But after an honest look at our to-do list we pushed it out a couple months. May 5th!

A date on the calendar helps bring everything into focus. We finalized designs for the Main Deck and Carnival Deck, a friend in motion graphics built our video, we had prototypes printed, and everyone worked on the crowdfunding page. Ringo wrote articles about aliens and added subtitles and footnotes to everything he could. We were ready to roll.

Then in March, the world shut down. For the three of us, the changes have not been extreme. We were working quietly in our silos already, long days spent indoors writing, designing, sending emails, and making excursions to the fridge.

For others, the changes have been dire. Layoffs, closures, and social isolation are a grind. As one of the only unionized tech companies, we hope (and we’ve read) that most workers laid off from Kickstarter will be OK.

As for our project, we’re 105% funded on Day 5, and can’t wait to cross the finish line. Even in a pandemic, people need games. And the thought of future game nights. We need laughter and howling and friends who shout in bad accents and snort milk out their noses.  And beards.

Thanks for coming on this crazy journey with us. Especially at this time.

BEFORE AND AFTER PICS OF RINGO’S TP STASH

The strategic goat game for weird friends is now a reality.  We're beyond excited to bring you the best possible version of our game.  So excited, I'm setting nerd levels to max (ok, they were already at max) to share exactly where we are in production.

👉  Not Safe for Work 1 is designed and in production.  You can preview 4 of those 13 cards here. (You must dodge the Gary Busey.)

👉  Not Safe for Work 2 (featuring The Buttery Lords, Stoned Grizzly Bear, and Jonestown Lemonade Stand) has been designed and is next up.

👉  Real World Consequences 1 is designed and in production.  Singing Anemone is the first card from RWC1 you can preview, she's on our KS campaign page hanging out with Pocket Giant.  Other cards from RWC1 include The Annoying Orc (bork bork), Rhyming Robots, and Mongoose Hands.  We'll preview these cards as we complete them.

👉  +2 Players Pack is currently being designed and features 7 new Goats, and a bunch of new Goblins, Rabbits, and Meerkats!  (The Meerkats are also pirates, which makes sense if you think about it.)

It's been a great day for the ZCG team and I for one (Alec) am gonna go collapse into bed.  I think Taylor already crashed out.  And Ringo...is probably running wild-eyed through the night somewhere.  Ringo.  Somebody find that guy and let him know we funded.

If you're not ready for sleep, it's reasonable to assume you'd benefit from a quick refresher on How to Defeat a Grizzly Bear in Close Quarters Combat.  It's info we'll all need at some point.

Good night all.  Thank you for making this happen.

P. S.  Please spread the word.  Word of mouth is everything to us.   Here's a picture the internet likes to get sassy with.  Thank you.

👉 Day 1 Rewards were UNLOCKED (so everyone gets them), and we’re SO CLOSE to unlocking disgusting Day 2 Rewards.

(Something like 20 pledges are needed and not only do we add an Expansion Pack to every order, but we’re FULLY FUNDED. So if you know anyone hankering for a weird goat game, who is awake between now and the hours of around 5am, put them in touch.)

So, I was just texting with Taylor and we were talking about the Goblin Prophet. (He’s the cranky looking gentleman with the fez saying the bones tell him nothing.)

We got to thinking, the internet really seems to love that dude.  A charming fellow we’ve never even met wants to make t-shirts out of him, and every time we post something with a Goblin people go nuts for it.

So we were thinking, would you like a Goats vs. Goblins Expansion Pack?

Needless to say, they don’t get along.

Let us know if you’d be up for something like that.

Thank you all for supporting our game and our continued adventures in oddness.

Get in touch for any reason.

PLUS:  The Zombie Pizza! token is now UNLOCKED.  It will be added to all orders.  Get your mongoose hands ready.

AND:  Our Semi-Secret Expansion Pack, Zombies Invade the Moon, featuring 13 ZCG characters kicking it in outer space with aliens and laser beams is SO CLOSE.

We've been in touch with every one of you, and if you have any questions, bad jokes, or excellent recipes please don't hesitate to reach out.

Love & Guts from the ZCG team,